A Rosen-type PT consists of an input and an output sections that are mechanically coupled by the transversal area of the PT. This mechanical coupling can be done by joining two ceramics parts with a bonding material, such as epoxy. However, currently this is done through a process called co-firing which allow the input and output sections of the PT to be integrated in a single ceramic body without a bonding interface.  In order to provide piezoelectric activity to the PT, the input and output sections must be polarized. The polarization is a process which consist in applying a large DC electrical field under specific and controlled conditions of time, temperature and voltage level. As a consequence of this electric field the internal multi-crystals of the ceramic structure adopt a specific disposition which allow the piezoelectric effect to exist.

In the above figure, the input layer shows only one single layer. In general, the input layer is manufactured with several multiple layers which are polarized in the "thickness mode" (perpendicularly to the longitudinal direction). On contrary, the output section is polarized in the longitudinal direction, as shown in above figure.

Rosen-type PTs are typically applied to high voltage applications, such as DC/AC inverters for driving the CCFL lamp used to backlight the LCD panels of laptop computers and other portable applications. In this type of applications, PTs offer several advantages compared to magnetic transformers, such as: 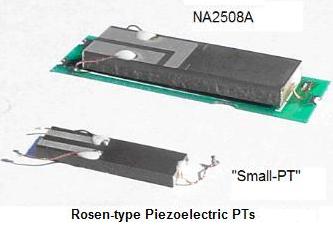 Face Electronics offers you several standard Rosen-PTs for step-up applications ranging from 1W to 5W. Additionally, Face can customize for your applications a variety of Rosen type PTs for your specific application demand including non-isolated (input and output grounds are common) and isolated configurations, where the output section is isolated from the input section. Keep in mind that in order to obtain the best performances from your PT, the PT should be customized to your specific load demands.

Transoner is the name given by Face Electronics, LC to its proprietary PT technology. Transoner was entirely developed in 1996 by Face and is currently considered one of the most promising PT topologies for power demanding applications.

Transoner refers to a radially-operated piezoelectric transformer having a multilayer structure for the input and output sections. Transoner operates in the first fundamental radial-extensional vibration mode. Different configurations are available. The left figure shows a topology including an input and an output section. Other topologies having the input layers divided in two parts sandwiching the output section have been also suggested to provide a symmetric structure. This allows the suppression of the spurious bending modes which may occur in a non-symmetrical structure. 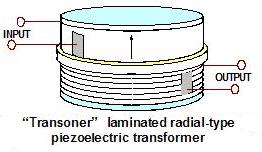 In the design illustrated in the right figure, the input section includes a single layer polarized in the thickness direction. In contrast, the output part consists of many stacked thin piezoelectric ceramic layers, and the layers have alternating inverse polarizations to each other in the thickness direction. This allows increasing the transformer output capacitance and thus allows its operation to low output loads and step-down applications.  One insulation layers is set between the input and output parts to isolate them electrically. The insulation layer has a slightly larger diameter compared to the PT body to enlarge the creepage distance between the input and the output sections.

When an AC voltage is applied to the input parts of the transformer of Figure 1, at a frequency that generates the fundamental radial-extensional vibration mode, the input parts oscillate in fundamental radial-extensionalvibration mode, which depends upon the electromechanical coupling factor kr. The vibrations are simultaneously transmitted to the output part, which converts them into electric energy by the direct piezoelectric effect, which depends on the electromechanical coupling factor kp. Generally, kp of a piezoelectric ceramic material is approximately twice as high as the electromechanical coupling factor k31 of longitudinal vibrations, leading to higher energy conversion efficiency of the radial vibration mode than that of the longitudinal vibration mode. Therefore, the power transmission efficiency of the piezoelectric transformer is higher, so that the volume of the transformer can be further reduced. 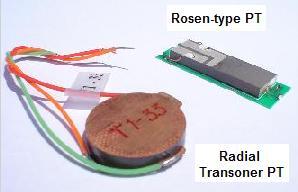 The frequency and load dependence can be easily evaluated by plotting the voltage gain against frequency curves for different output loads, as shown in Figure 3. 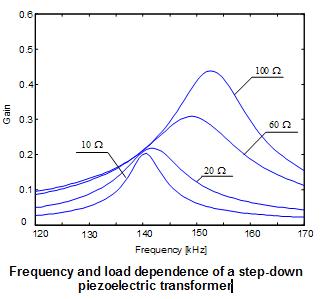 Due to this double dependence, transformer ratio and efficiency are strongly dependent on frequency control, load fluctuation and input voltage variations. Consequently, in order to ensure stable operation of the PT, the driving circuit has to correct the influences of these electrical variables. The implementation of a compact and reliable controlling circuit using discrete components is complex and, thus has discouraged many researchers from entering this field. Currently, different IC makers have developed integrated circuit solutions which include frequency tracking control to achieve for input voltage and load regulation, and internally built protection circuitry, among other features Although this ICs have been, so far, focusing in the high-voltage backlighting applications, some IC-makers are currently developing ICs for ac/dc and dc/dc power conversion applications.