The PX200 is a low-noise high-current linear amplifier for driving piezoelectric actuators and other loads. The output voltage range can be unipolar, bipolar, or asymmetric from 50V to 200V. Refer to the specifications table for the available output voltage ranges. Two amplifiers can be connected in bridge-mode to provide up to +/-200V or +400V. The PX200 has a high output current up to 13 Amps peak and is well suited to precision applications that require high power and frequency.

The output connectors include BNC, LEMO 00, LEMO 0B.302, and plug-in screw terminals. The PX200 is suited to a wide range of applications including electro-optics, ultrasonics, vibration control, nanopositioning systems, and piezoelectric motors.

With a capacitive load, the maximum operating frequency due to RMS current limit is

where Irms is the current limit, Vp-p is the peak-to-peak output voltage, C is the load capacitance. The above equation is also true for any periodic waveform, including triangle waves and square waves.

In the above table, the frequencies limited by slew-rate are marked with an asterisk. The slew-rate is approximately 35 V/uS which implies a maximum frequency of 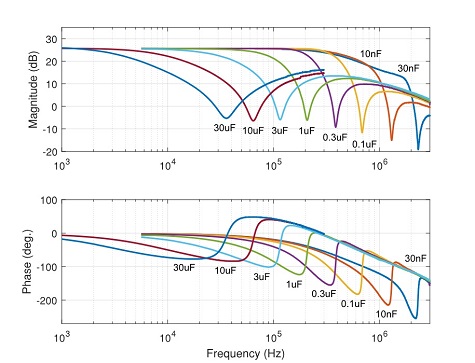 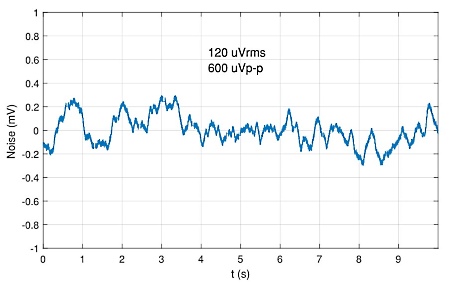 The high frequency noise (20 Hz to 1 MHz) is listed in the table below versus load capacitance. The total RMS noise from 0.03 Hz to 1 MHz is found by summing the RMS values, that is

In bridged mode, the load is connected between the outputs of two amplifiers, which doubles the output voltage span and power. Grounded loads cannot be driven using bridged mode. Care should be taken not to connect the negative side to ground accidentally, for example, by using a grounded oscilloscope probe.

Figure 3 shows how two amplifiers are connected to achieve +/-200V across a load. A +/-10V signal is applied to both amplifiers, and the bottom amplifier is configured in inverting mode. The total voltage across the load is +/-200V and the effective gain is twice the gain of a single amplifier. Common bridged-mode configurations are listed in Table 5.

The current limits in bridge mode are identical to normal operation. The power bandwidth calculator can also be used for predicting bridge-mode performance by entering the total voltage across the load. For the example in Figure 3, the total peak-to-peak output voltage is 400V. When entering this value to the calculator, an error will be shown since 400V is greater than the voltage span of a single amplifier; however, the calculator output is remains valid. 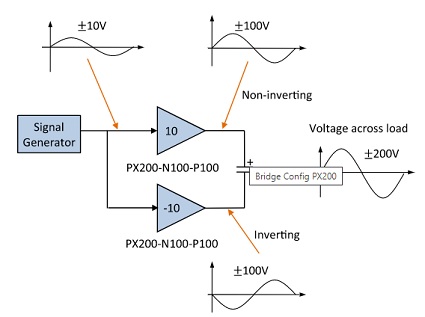 PiezoDrive amplifiers are guaranteed for 12 months from the date of delivery. The warranty does not cover damage due to misuse.